Torque Release Technique or "TRT" is the most up-to-date chiropractic technique available. It has been designed as part of scientific research into the health benefits of chiropractic.

This is the specific instrument used in Torque Release Technique. Once the primary area of spinal block has been located, the Integrator is placed against the skin and released. The tip releases at a speed of 1/10,000 of a second and with a torque either clockwise or counter clockwise. The instrument also has recoil feature that adds to the dynamics of the impulse. All these features allow very little force to be used by the Integrator.

The impulse of the Integrator produces a specific release to stuck motion within the joint being adjusted and a release of stuck stress or tension within the related nerve. These together allow the body to make a corrective and healing response. 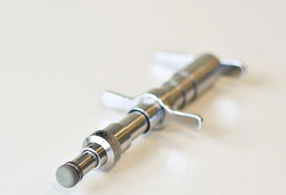